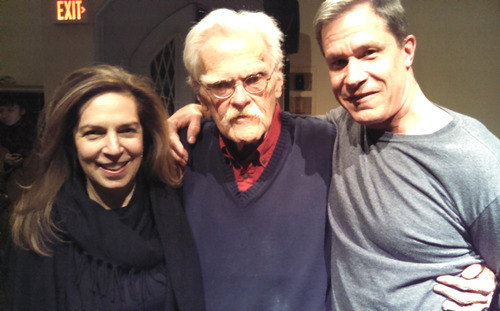 The first two to be issued in Dr. Cicero’s new series of poetry volumes, edited by Robert Kelly, Wavetable by Michael Ives and The Red Dress by Billie Chernicoff, will be released in January 2015.

“I found Robert Kelly’s voice on an LP from the public library in 1984, and said to myself and everyone else who was listening, ‘I want to do THAT,’ ” said Michael Ives, when asked about his upcoming publication. “And now here we are, thanks to the good Dr. Cicero, who is decidedly in.”

Billie Chernicoff had this to say: “My original plan to distribute my work was to leave it on trains. Robert Kelly’s poetry series for Dr. Cicero seems the most wonderful train of all, with real steam and a thrilling rumble.”

Kelly wrote the following, about each of the poet’s works:

About Billie Chernicoff and The Red Dress:

Mallarmé describes the poem as like a target —  the poet doesn’t try to hit the bull’s eye, but rather with deft and multiple shafts surrounds the place where the core, the feeling, the meaning must be. The truth of that likeness  animates the intensity of all poetry, especially poems that rely  on imagery — visual, of course, but tactile, auditory, olfactory too.  It is just here that Chernicoff’s poems so dazzle me, please me. She relies on the things of the world, things we all share in the knowledge of, to move her voice towards us. In her slow, slender lines she invites collusion with the reader’s breath, so we find ourselves breathing along with the text, startled by what she’s just made us say. She leads us into a sensuous world of vivid, unsentimental love, love not just for bodies but for moves and circumstances. They are our reward for breathing with her.

About Michael Ives and Wavetable:

His heart races his vocabulary to the goal in us —the long arc of his sentences, rainbowing down to a sudden shock— his lines jolt. Every sentence leaves us with something we’ve never known before, some new giving from the mind embodied in words. Ives’s syntax is a house on fire, and like flames his words are hungry and quick, and leave nothing the same after they pass. That’s what draws me to his work—it changes things, it entrains difference. No poet I know of is so determined to summon clangorous words from technologies ancient and future,  and so willing to yield his own huge breath, trained by a lifetime in music, to their service.