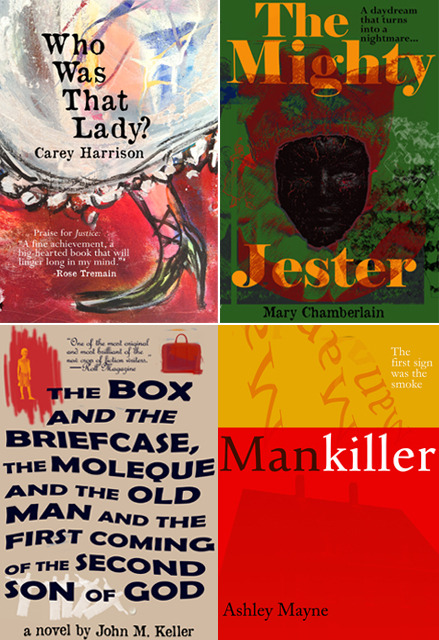 Four new novels are set for a June ‘14 publication date: WHO WAS THAT LADY? by Carey Harrison, MANKILLER by Ashley Mayne; THE MIGHTY JESTER by Mary Chamberlain and THE BOX AND THE BRIEFCASE, THE MOLEQUE AND THE OLD MAN, AND THE FIRST COMING OF THE SECOND SON OF GOD by John M. Keller.

WHO WAS THAT LADY?, Carey Harrison’s panoramic new novel, takes us from the deep caves of South-West France to the towering Lion Rock in Sri Lanka, and back again. Roland Watkins is an archaeologist who invents a new form of psychotherapy. It sweeps the world. He can save other people’s relationships. Can he save his own?

In a prose whose strength and startling lyricism evokes Cormac McCarthy, Ashley Mayne’s MANKILLER tells the story of two wild Texas girls on the loose, orphaned renegades with nothing to lose but each other.

John M. Keller’s new novel explores the gated city of Beverly Hills, Brazil, capital and seedbed of the world’s soap opera industry, sitting halfway between São Paulo and Rio de Janeiro, a place no one ever goes to or leaves, where admission depends upon meeting a beauty requirement. Sylmara, a young actress on the brink of becoming the city’s next great export, is shocked when her celebrity aunt, famous for her award-winning breasts—and in whose footsteps Sylmara is poised to follow—leaves the community without telling anyone and immediately turns up dead. Will Sylmara follow suit by leaving, also dying in the favelas just outside the gates?