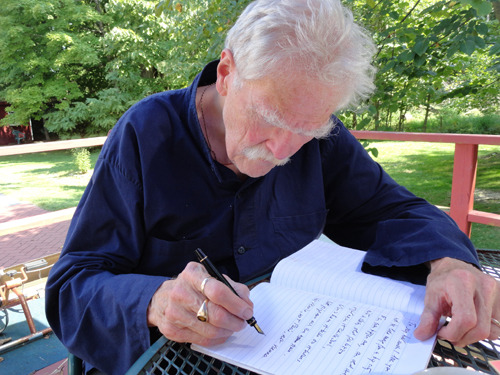 Dr. Cicero Books is pleased to announce an annual series of poetry volumes under the editorship of Robert Kelly. Each volume will be devoted to an individual poet, beginning in 2014. The first two poets will be Michael Ives and Billie Chernicoff.

Robert Kelly has been widely anthologized and published, over a prolific career spanning fifty years, and drawn comparisons to predecessors as varied as Blake, Pound and—for his sense of balance in a line—Wallace Stevens. He was closely associated with the Deep Image group in New York, later with poets of the Black Mountain lineage, and was an editor of the Chelsea Review, Trobar, and Matter, and advisory editor ofCaterpillar and Conjunctions.  He is the author of many books of poetry (most recently Lapis, Fire Exit, Uncertainties, The Hexagon), a few novels (The Book from the Sky most recently) and five collections of short fiction (The Logic of the World the latest).

Michael Ives lives in the Hudson Valley. His work with the language/performance trio, F’loom, was featured on National Public Radio and in various international anthologies of sound poetry. He is the author of The External Combustion Engine, from Futurepoem Books. His poetry and prose have appeared in numerous magazines and journals both in the United States and abroad. He has taught at Bard College since 2003.